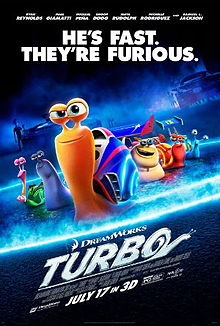 This one’s a bit dated (holy hell, I haven’t even reviewed Keanu Reeve’s Man of Tai Chi), but here goes.

Turbo is okay. It’s by DreamWorks. What can you expect? It’s not as high-quality as Pixar’s movies (except for Cars series. I really don’t understand why Cars is so famous. Perhaps I’m just not into that sort of thing, and oh my God, Pixar is releasing Planes, a spin-off of Cars). Honestly, it’s one of the best summer movies I’ve seen this summer. Granted, it’s a cartoon, or more precisely, a 3D animation. Apart from its catchy summer tune (seriously, “That Snail Is Fast”?), it tickled my fancy for a while. Or rather, it slapped my face at the right time.

I didn’t write the quote down, but there was one moment early in the movie when Chet (Turbo’s brother) talked to Turbo (whose real name is Theo) about how Theo’s urges to be fast was unnatural. Hello.

I’m guessing with the subplot of Theo being bullied (by other garden snails, not the racing ones, which are so awesome!), it strikes me as trying reinforce not only that notion that even underdogs can strive for (and succeed at) that one shot that’s make or break, but also about knowing what we really are in life (and by that I mean our urges. And by our urges, I mean, well, you know, our sexuality). So, moral of the story: be gay, people!

Anyway, Theo got involved in some freak accident that made him fast. Like, superfast. Like, even faster than race cars. Then Chet, ever the skeptic (or probably overprotective of his brother) asked, “What would you do if you woke up to find your powers have disappeared?”

Theo (or Turbo) thought for a moment and said, “That’s why I’m going to use it as much as I can while I still have it.”

Well, the quote is somewhere along those lines anyway.

That being said, I know it’s an animation, I know it’s fantasy, I know it’s far-fetched (you’d think a snail that fell into a car’s engine would automatically be barbecued), but here’s what bothers me so much from that movie:

I rollerblade. And holy hell, rollerblading on asphalt is a pain. It destroys the wheels. So how in gay hell can a snail’s undersides not be destroyed when he races 500+mph on asphalt? Seriously? How?

this pussy tweets too!